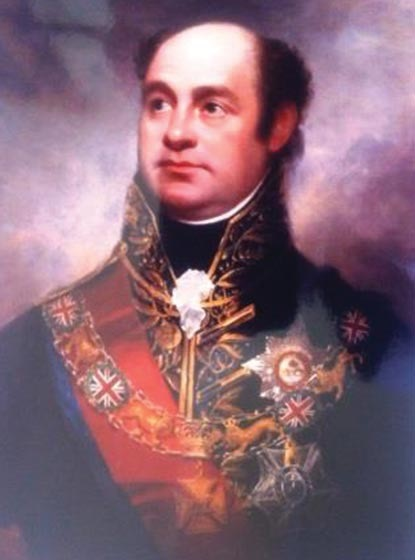 William Carr Beresford was born in Ireland on 2 October 1768.  He was one of two sons born to George Beresford, Earl of Tyrone (later First Marquess of Waterford) prior to his marriage to Elizabeth Monck. Following a period in school at Catterick, Yorkshire, he attended the military academy in Strasbourg before joining the 6th Regiment of Foot (1st Warwickshire Regiment) as ensign in 1785. Posted to Nova Scotia in 1786, he was involved in a shooting accident while out hunting which led him to lose sight in his left eye.

Promotion came rapidly, albeit by changing regiments. In 1789 he joined the 16th Regiment as a lieutenant, a regiment of which in later life he became colonel.  In the following year he became a Captain in the 69th Regiment of Foot and in that capacity served with the marines under Admiral Lord Hood. Having formed part of the  garrison at Toulon in 1793, he participated in the capture of Corsica, distinguishing himself at the capture of Mortello, as a result of which he achieved his majority. In 1794 he was appointed Lieutenant Colonel of the 124th Regiment (the Waterford regiment) and when this was disbanded and its men allocated to the 88th Regiment (Connaught Rangers) a year later he was appointed Lieutenant Colonel of the latter regiment.

The 88th was nominated to serve in the West Indies under Sir Ralph Abercromby, but the transport fleet was so widely dispersed by storms that the regiment became greatly fragmented and following the return home of much of the regiment it was sent to defend Jersey between 1797 and 1799.

Beresford travelled with the 88th regiment to India in 1800, and a year later led the first brigade of the army under Sir David Baird assigned to assist Abercromby in Egypt. The army marched overland from the Red Sea to the Nile and then was transported on boats to Cairo in a voyage that seized the public imagination. Following the evacuation of Egypt by the French, Beresford served as Commandant of Alexandria until the British Forces were withdrawn in 1803.

In 1806 Beresford served under Baird at the capture of the Cape Colony. Subsequently with a force of less than 1600 men he captured Buenos Aires, the seizure of which was the brainchild of Sir Home Popham, commander of the British fleet which had brought Baird and his army to the Cape. After holding the city for 7 weeks, Beresford surrendered to vastly superior forces. He was prisoner for some time before effecting his escape to Montevideo where a substantial British army was then assembling to attempt the further and ultimately unsuccessful conquest of the River Plate Colony. Beresford did not partake in this second expedition but returned home to a hero’s welcome, not least perhaps because of his achievement in dispatching a large amount of captured ‘Spanish’ silver bullion to England prior to his surrender.

In 1807 Beresford took possession of the Portuguese island of Madeira and was appointed Governor.  He was promoted Major General in March 1808 , and in August left Madeira to serve in Portugal  where he joined fellow Anglo-Irishman Arthur Wellesley, the future Duke of Wellington (hereafter referred to as Wellington). Beresford arrived in Portugal after the battle of Vimeiro. He was appointed a commissioner to enforce the terms of the Convention of Cintra by Sir Hew Dalrymple who had succeeded Wellington in command of the British forces. Following service in Portugal and Spain, he took part in the retreat to La Coruna and commanded the rearguard in the evacuation of the British army from that port in January 1809.

Commander in Chief of the Portuguese Army

Beresford’s stay in England was a short one. In March 1809 he was appointed Marshal and Commander in Chief of the Portuguese army. The government of Portugal had requested the appointment of a British General to rebuild and lead their army which had been largely disbanded by the French forces of occupation. In his capacity as Marshal, Beresford with the assistance of others including Dom Miguel Pereira Forjaz the Portuguese Secretary for War and Foreign Affairs, is credited with the reform and rebuilding of the Portuguese army.  Beresford was a strict disciplinarian but he was so successful in restructuring the  army that within a year Wellington was happy to put Portuguese regiments in the line with British regiments, knowing that they would perform to orders.  Many Portuguese regiments were brigaded with British regiments in a system  that worked well for the remainder of the war.

Knighted following the battle of Busaco (1810), Beresford was given a temporary independent command in early 1811, at a time when Wellington was preparing to push back the French under Marechal Massena from the Lines of Torres Vedras, north of Lisbon. While Wellington pursued Massena’s army out of Portugal and into Spain, culminating in the battle of Fuentes de Onoro (3-5 May 1811) Beresford was sent south to attempt the recapture of Badajoz, which had recently fallen to the French.

The defining battle of this southern campaign was Albuera (16 May 1811), resulting in the repulse of the French army under Marechal Soult which was attempting to relieve Badajoz. Shortly before the commencement of the battle, Beresford’s largely Anglo-Portuguese force was joined by a Spanish army under General Blake. This was the first occasion on which an allied force of this nature had fought together and it was not without its problems.

While Soult retired to Sevilla with heavy losses, and the Allies were able to reinvest Badajoz, the battle of Albuera was a sanguinary affair in which the Allies, and particularly the British, themselves lost large numbers.   Beresford’s personal bravery demonstrated on the battlefield was not in doubt,  but he was subject to  later criticism from some quarters alleging indecision and lack of tactical awareness. Wellington however never lost faith in Beresford, insisting in subsequent years that if he should be incapacitated, Beresford should be appointed to succeed him in command of the army in the Peninsular. 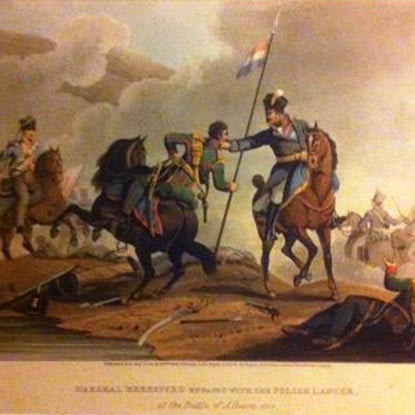 Marshal Beresford pulling a Polish lancer from his horse at the Battle of Albuera.  The painting was by Franz Joseph Manskirch and the engraving by M Dubourg, published by Edward Orme, Bond Street 1816.   The encounter of William Carr Beresford and the Polish lancer is well recorded.  The Polish (Vistula) lancers were able to get in behind the British infantry and endangered the command officers.  A lancer tried to attack Beresford but the latter grabbed him and threw him to the ground.  When the poor fellow resumed his attack on Beresford he was dispatched by an aide.

Following Albuera, Beresford resumed the work of building up the Portuguese army, not just in  trained manpower, but in its administrative and medical functions.  He was present at the fall of Ciudad Rodrigo in January 1812, where  his nephew, John Theophilus Beresford, was mortally wounded; and Beresford himself was seriously wounded later the same year at the battle of Salamanca.  Following recuperation he participated in the Pyrenees campaigns,  being present at the battles of Vitoria, the Nive, the Nivelle, Orthez and finally Toulouse (10 April 1814) where he led the Allied forces under Wellington’s command in the decisive assault on Mont Rave and compelled the withdrawal of his old adversary, Marechal Soult.

John Theophilus Beresford was serving as a lieutenant with the Connaught Rangers (88th).  He was aide de camp to Major General Henry Mackinnon.   During the assault of Ciudad Rodrigo on the night of 19 January 1812 the French exploded a mine underneath the group leading the attack on the Great Breach which killed Mackinnon and wounded John Beresford.   At first the latter's injuries were not thought to be serious though he suffered burns to the face.  He was taken to Vilar Formosa where the Marshal had him attended to but he died on 28 January of his wounds, not yet 20 years of age, and buried at Almeida.

Returning to command the Portuguese army after the close of the war, Marshal Beresford was not present at Waterloo.  The Portuguese royal family and much of the governmental support function had moved to Rio de Janeiro in 1807 following the French invasion of Portugal, and the Regent Prince Joao (King after 1816) did not return  to Portugal until 1821.  In the interim Beresford remained Commander in Chief  of the Portuguese army in difficult circumstances where competing factions sought to reduce the influence of the army and in particular the British officers appointed to it.   Beresford was closely identified with the royal family and conservative interests and following the liberal revolution of 1820 was not allowed to land in Portugal on his return from Brazil.  Henceforth while he retained connections and visited Portugal, his influence was much reduced there. He was appointed Governor of Jersey in 1820, a post he held for the rest of his life.   For some time he was involved in British politics serving as Master General of Ordnance  in Wellington’s government of 1828.

Appointed the Count of Trancoso on 13 May 1811 and subsequently the Marques de Campo Maior (17 December 1812 ) in Portugal, he was elevated to the British Peerage in  May 1814 taking as title Lord Beresford of Dungarvan and Albuera, thus recognizing both his Irish heritage and his Peninsular affiliations.  In 1823 he was created Viscount Beresford.  Late in life he married his first cousin Louisa de la Poer Beresford.  They are both buried at Kilndown in Kent, near where they lived at Bedgebury Park, and where he died on 8 January 1854, the last surviving Marshal of the Napoleonic wars.