By late April 1812, the Duke of Wellington had successfully captured the strategic border fortresses of Badajoz and Ciudad Rodrigo, commanding the two major routes between Spain and Portugal. He now prepared to advance into Spain with the largest army he had commanded to date, which was strong enough to take on any French army. There were two French armies in Spain, however: Marmont’s Army of Portugal, garrisoned near Salamanca, and Soult’s Army of the South, in Andulucia. The Tagus River separated the two armies.

The only bridges over the Tagus were at Toledo, Talavera, Arzobispo, Almaraz, and Alcantara. The Alcantara bridge was destroyed by the Portuguese, under Col. Mayne, on 14 May 1809. The bridges at Toledo, Talavera, and Arzobispo were under French control but, according to Napier, the left bank of the Tagus at Talavera and Arzobispo was "so crowded by the rugged shoots of the Sierra de Guadalupe, that it may be broadly stated as impassable for an army".  Any artillery and heavy baggage moving between the two armies would have to  cross at Toledo or Almaraz. 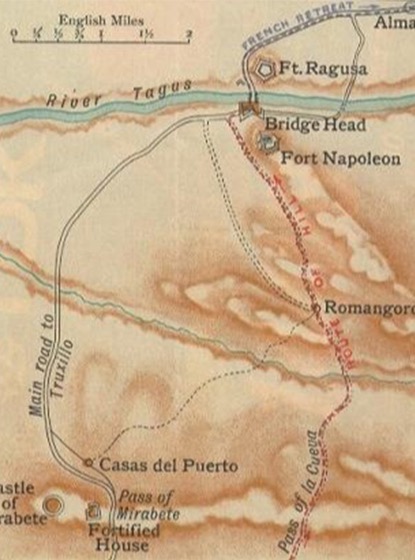 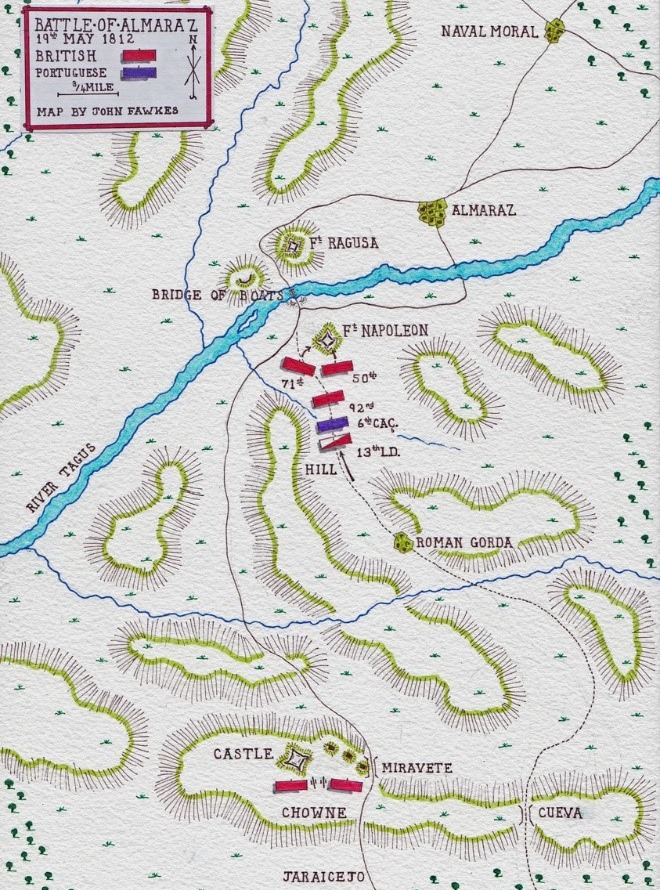 Regimental deployment. Note: 4 Portuguese batallions of the 6th and 18 line Regimentos are not depeicted in the centre column

The latter bridge, built by Emperor Carlos I in the 16th Century and known by the local people as the Albalat Bridge, was partially destroyed by the Spanish on 14 March 1809 to prevent its use by the French. A pontoon bridge was built by the French in the autumn of 1809 just west of the Albalat  bridge. It was about 200 meters long and built with heavy pontoons. The center span was a light boat, designed to be removed at night for security.

General Rowland Hill was detached with a small force to attack the pontoon bridge over the Tagus. His force, numbering around 6000 men with nine guns, was virtually the same that surprised Girard at Arroyo dos Molinos in 1811.  The task facing Hill was a considerable one as the bridge of boats was protected on both banks by strong earthworks. The southern end of the bridge was protected by a bridge-head that was overlooked by Fort Napoleon. This strong fort, capable of holding 450 men, was situated on top of a hill above a steep embankment.  It was not a difficult climb for any attacking troops, however, and entry into the fort was made slightly easier by two large scarps, rather like steps, which led onto the ramparts of the fort. The rear of the fort sloped down to the bridge-head and was protected by a palisaded ditch and loop-holed tower that would act as the last place of refuge should Hill's men gain entry into the fort. On the northern bank of the Tagus stood Fort Ragusa, in which was stored all the garrison's supplies and ammunition. This five-sided fort also had a twenty-five feet high loop-holed tower that was to be the last place of defence. This fort was also covered by a field work close to the bridge.

The French had further strengthened the position at the bridge by securing the main road from Trujillo at a point about six miles south of the bridge. Here, where the road ascends the Sierra de Mirabete, the pass was commanded by a castle around which the French had built a twelve foot high rampart that housed eight guns. This was connected to a fortified house close to the road by two small works, Forts Colbert and Senarmont. The mountains were impassable to any wheeled vehicles and the only other pass through the mountains, La Cueva, was two miles to the east of Mirabete. The road on the southern side of the mountains was passable to vehicles but once through the pass the road deteriorated into little more than a footpath.

Hill's plan involved dividing his force into three columns. The first, consisting of the 28th, 34th and the 6th Caçadores, under General Chowne, was to storm the castle of Mirabete. The second, or centre column, consisting of the 6th and 18th Portuguese infantry along with all the artillery, was to proceed along the main road and attack the works defending the pass. The third column, Howard's brigade, consisting of the 50th, 71st, 92nd and a single company of the 5/60th, and commanded by Hill himself, was to climb the road leading through the pass of La Cueva and approach Almaraz via the path. The three columns set off at nightfall on May 16th but at dawn all three were far from their objectives due to the rough nature of the terrain. 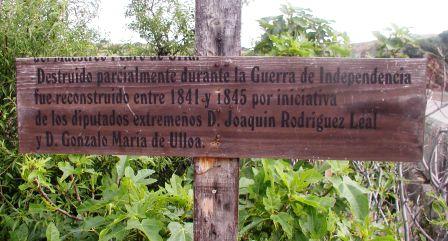 It was clear to Hill that there was little chance of being able to surprise the garrison at the bridge and therefore looked for another way to get his guns through the mountains. The French garrison was still unaware of his force and he thus thought that he might be successful if he attacked Fort Napoleon and the bridge using only his infantry.

On the evening of May 18th, Howard's brigade proceeded through the pass of La Cueva, reinforced by the Portuguese Caçadores. By dawn on May 19th, Hill's men had reached a point just half a mile from Fort Napoleon but they were detected by the French that morning as they crossed the mountains. The garrison inside Fort Napoleon, commanded by Major Aubert, was alerted and the two centre boats of the bridge were removed.

The attack on the bridge at Almaraz began at dawn on May 19th when General Chowne's guns opened up against the castle at Mirabete. The defenders, warned of the presence of Hill's troops, although prepared for the assault, were still taken by surprise when the 50th and part of the 71st burst from their cover and charged up towards the fort in the face of fire from the defenders and from the guns in Fort Ragusa. British troops were struck down as the dashed forward but some reached the top of the hill and flung their ladders against the scarp. The men pulled themselves onto the first of the two steps and drew their ladders up. They placed them on the step, climbed to the top of the ramparts and were soon engaged in hand-to-hand fighting with the defenders along the ramparts.

First up was Captain Candler of the 50th who leapt over the parapet and was struck by several French musket balls.  His men followed him and the defenders soon began to retreat to the bridge-head. The commander of the fort, General Aubert, refused to run and put up a gallant fight. He refused the offer of surrender and a sergeant of the 50th ran him through with his pike. French troops tried to get to safety inside the tower but were forced to surrender. The guns of Fort Ragusa were unable to fire for fear of hitting their own men fleeing to the river.

The defenders of the bridge-head joined in the retreat across the pontoon bridge. The guns inside Fort Ragusa fired briefly against Fort Napoleon until answered by the captured guns. The action had lasted just forty minutes. Four grenadiers of the 92nd swam to Fort Ragusa and brought back some boats to repair the pontoon bridge. Soon the rest of Hill's force arrived to find the French abandoning all their works on both sides of the river. Hill had these works were blown up and the bridge burned.

The castle at Mirabete remained in French hands after William Erskine spread a rumour that Soult's entire force was approaching. This caused Hill, who had intended to level the castle, to retire to Trujillo and loose the chance to achieve complete success. The raid on the bridge at Almaraz cost the British 33 killed and 148 wounded, of which 28 killed and 110 of the wounded belonged to the 50th Regiment. French losses were estimated at about 400, 259 of whom were prisoners.

In 1813, the Duke of Wellington sent Lieutenant Colonel Henry Sturgeon of the British Royal Staff Corps to repair the bridge. He constructed a suspension bridge, similar to the one he built at Alcantara.  The Spanish built the present bridge between 1841 and 1845.

This action enabled the separation of the two French armies, which led to the great success of the Battle of Salamanca in July, 1812.