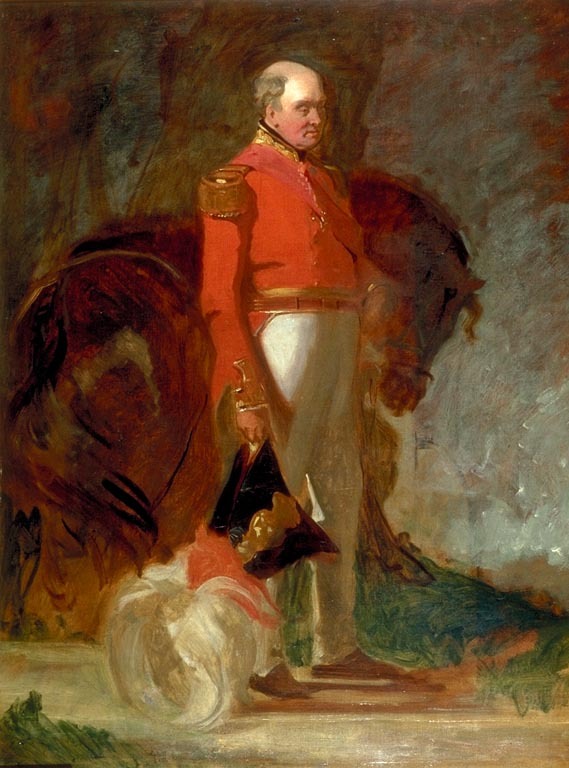 General Rowland Hill, 1st Viscount Hill of Almaraz, was born 11 August 1772, the second son of Sir John Hill and Mary Chambre. Hill studied the techniques of war in Strasbourg and was commissioned into the 38th Foot in 1790.

There were three ways to acquire a commission:

Hill served at the siege of Toulon and also in Egypt, Ireland and Hanover. In 1805 he became a major-general. In 1808, Hill sailed for Portugal where he began his long and distinguished service in the Peninsula. He was a lieutenant general and second-in-command in the later stages of the Peninsular War. Nicknamed "Daddy Hill", he was generally well-liked by his soldiers. It was claimed that he used profanity on only two occasions.

Hill was known for his personal generosity towards his officers and men. On one occasion, he provided a wounded officer who arrived at his headquarters with a lunch basket. Another time, a sergeant delivered a letter to Hill. Expecting nothing but a nod of thanks, the man was astonished when the general arranged for his supper and a place for him to stay for the night. The next day, Hill gave him food and a dollar for the rest of his journey.

While serving under Wellington at the Second Battle of Oporto, units of Hill's corps launched an impromptu assault across the Douro River that ultimately routed Marshal Soult's French corps from Porto.

Hill commanded the 2nd Infantry Division at the Battle of Talavera, July 1809. The night before the battle, Marshal Claude Victor mounted a surprise attack, swept aside two battalions of the King's German Legion and seized a key elevation. AsHill later recounted, "I was sure it was the old Buffs, as usual, making some blunder." Nevertheless, he led a reserve brigade forward in the dark. In the short clash that followed, Hill was briefly grabbed and nearly captured by a Frenchman but his troops recovered the Medellín.  This is the first occasion on which Hill supposedly swore.

Hill fought at the Battle of Buçaco, leading the 2nd Division during Marshal Masséna's 1810 invasion of Portugal. When Massena withdrew to Santarem, Wellington detached Hill's corps (2nd Division and Hamilton's Portuguese Division) to the southern bank of the Tagus. On 29th November Major General Hill was disabled by a severe attack of fever and returned to England to recover.

On his return, according to Oman, "Everyone from Wellington to the simplest soldier in the ranks was delighted to hear that Rowland Hill had landed at Lisbon on 24 May 1811 and was on his way to resume command of the 2nd Division.  He was at once placed in the same position that he had held in 1810, i.e. entrusted with the command not only of his own division but of the whole wing of the army which was detached to the South."

His troops were exhausted after the Battle of Albuera and served as a covering force during the second siege of Badajoz. Hill remained in independent command of a 16,000-man corps watching Badajoz while Wellington moved the rest of his army north.

In May 1812, after the capture of Badajoz, Hill led an audacious raid that destroyed the bridge over the Tagus River in the Battle of Almaraz. While Wellington was fighting the Battle of Salamanca in July 1812, Hill continued to protect the southern flank, based on Badajoz with an 18,000-man corps, including the British 2nd Division, John Hamilton's Portuguese division and William Erskine's 2nd Cavalry Division.

After the British capture of Madrid, Hill had responsibility for an army of 31,000 Anglo-Portuguese and 12,000 Spanish troops. When the French massed superior forces against the British in the autumn of 1812, Hill safely brought his army back from Madrid to join the main army under Wellington near Alba de Tormes.

Hill commanded the Right Column during the campaign and decisive British victory at the Battle of Vitoria on 21 June 1813. Still in corps command, he fought in the Battle of the Pyrenees. At Vitoria and in Wellington's invasion of southern France, Hill’s corps usually consisted of William Stewart's 2nd Division, the Portuguese Division (under John Hamilton, Francisco Silveira or Carlos Le Cor) and Pablo Morillo's Spanish Division. Hill led the Right Corps at the Battle of Nivelle on November 10.

On 13 December 1813, during the Battle of the Nive, Hill performed what may have been his finest work in his defense of St-Pierre d'Irube. With his 14,000 men and 10 guns isolated on the east bank of the Nive by a broken bridge, Hill held off the attacks of Marshal Soult's 30,000 soldiers and 22 guns. He fought the battle with great skill and "was seen at every point of danger, and repeatedly led up rallied regiments in person to save what seemed like a lost battle ... He was even heard to swear." Later, he fought at the Orthez and Toulouse. Wellington said, "The best of Hill is that I always know where to find him."

At the Battle of Waterloo Hill commanded the 2nd Corps. He led the famous charge of Sir Frederick Adam's brigade against the Imperial Guard towards the end of the battle. For some time it was thought that he had fallen in the melee. He escaped, however, without a wound and continued with the army in France until its withdrawal in 1818.

On the 27 August 1815 the Dutch King William I made him a Commander of the exclusive Military Order of William. He succeeded the Duke of Wellington as Commander-in-Chief of the Forces in 1828 and served in this capacity until 1839.

A very pleasant situation Hill's is. He has been given the choice of acting in eleven different situations.
Lord Seaton