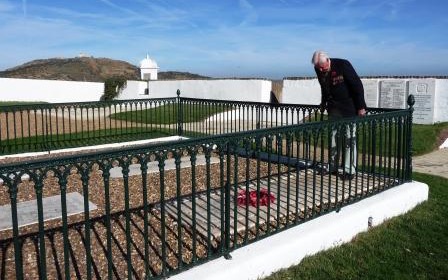 Among the generals of the Peninsular War, Daniel Hoghton is not one of the best known, but his death was marked with distinctions never before granted to officers of his rank.

Major General Daniel Hoghton was born on 27th August, 1770 in Hedingham Castle Essex, the second son of Henry Hoghton, the one time Member of Parliament for Preston, sixth baronet and the younger brother of Sir Henry Philip [de] Hoghton, seventh baronet of Hoghton Tower in Lancashire.

Daniel joined the army in 1793. Following the outbreak of war with revolutionary France, several new regiments were raised. Daniel was commissioned as a Captain in the 82nd Foot in Sir James Grant’s company. This company then formed the basis of another new regiment, the 97th (Invernessshire Highlanders) and Daniel was promoted to Major. In August 1795 he exchanged into the 67th (South Hampshire) and was dispatched to the West Indies and served during the Haitian Revolution. On 3rd May 1796, he was promoted to lieutenant colonel in that regiment.

This rapid promotion would have been by purchase, as was the custom. On 31st January 1799 he transferred as a Major to the 88th Connaught Rangers. This regiment had a fearsome reputation fully earning their nickname ‘The Devil’s Own’, later that year he went with a detachment of the 88th to India, arriving at Madras in August. He hadn’t been long in India when he was attached to the staff of the Governor General Lord Wellesley and came to know his younger brother Arthur, later the Duke of Wellington.

Daniel left India in April 1804 with despatches, sailing from Calcutta via Bombay to the top of the Persian Gulf. From there he rode what was known as ‘The Baghdad Route’, arriving at Constantinople after some 1,400 miles. From there he proceeded by coach via Bucharest, Prague, Berlin and Hamburg, where he took a ship for Harwich, arriving in August. This was not the quickest route, but much the most interesting, so presumably the despatches were not very important.

On 22nd November that year he was appointed Lieutenant Colonel of the newly-raised second battalion of the 8th Foot the King’s (Liverpool) Regiment, effectively his local regiment. On 1st January 1805 he was appointed Colonel of the Regiment, which was ordered to the West Indies. However due to the uncertainties of the French movements, counter order followed order and the force never moved further than the southern coast of Ireland.

This was a period of great uncertainty. Later that year, the 8th was part of the forces sent to Northern Europe under Sir Arthur Wellesley on the river Weser expedition, returning to Dover in July 1806.

In August of the following year, Daniel and the 8th formed part of the force despatched to Copenhagen to prevent the Danish fleet falling into the hands of the French. The success of this expedition soured Anglo-Danish relationships for a generation.

In December, the 8th set sail for Martinique. Daniel, as a Brigadier commanded the 1st Brigade, comprising the 7th and 23rd Regiments. For our tale, this is significant. The 7th (Royal Fusiliers) and the 23rd (The Royal Welch Fusiliers) formed the ‘Fusilier Brigade’ which played such a decisive part at the battle of Albuera, but not under the command of General Hoghton.

Daniel was now almost forty years of age and was contemplating a more settled existence. He wrote to Arthur Wellesley and others requesting a governorship in one of the West Indian Islands.

Posted to the Iberian Peninsula

However, his wish was not granted; British forces were needed in Spain and Portugal and he was ordered home. In London, he stayed at his favourite hotel – Loriats – in Bond Street, preparing for his departure for Cadiz.

He arrived there in April 1810 and was appointed to the staff of the British force as a Brigadier. On 25th July he was promoted Major General and in September he left Cadiz to join the British army in Portugal. There he was appointed to command the brigade composed of the 29th (Worcester), 1/48th (Northamptonshire) and 57th (Middlesex), part of the 2nd Division.

In November the French began their withdrawal from the Lines of Torres Vedras. In December Lord Hill, known to his troops as ‘Daddy Hill’ the veteran commander of the 2nd Division was ordered home suffering from fever. His command was transferred to Beresford, a marshal in the Portuguese army. Daniel now pressed for a transfer to the 4th Division commanded by his friend General Lowry Cole, hoping there was a brigade vacant. The petition was not granted, and he moved with the rest of Beresford’s army, which had been ordered to relieve the Spanish garrison of Badajoz, besieged by the French, along the south bank of the Tagus.

Long before they could get there, the Spanish garrison had capitulated. Writing from Elvas on 31st March Daniel, stated that ‘Reports say the governor got a hundred thousand dollars for this piece of villainy’.

Beresford’s force now besieged Badajoz, but practically nothing went right. The rations they had been expecting had been eaten by the Spanish. The boats needed to cross the Guadiana did not exist. The 4th Division had marched so far and so hard they had worn their shoes out. It took a week to get more up from Lisbon. There was no siege artillery. That enterprising artilleryman Captain Dickson drew what guns from Elvas that he could, but many were over two hundred years old. The plan for the siege laid down by Lord Wellington insisted on taking the two strongest parts of the defence. If these had fallen, so would the rest, but they were too strong and the French Governor, General Phillipon was too resourceful.

On 12th May 1811 Beresford heard that the French under Marshal Soult had left Seville to relieve Badajoz. On 15th May, he raised the siege, ordering Hoghton’s and Lumley’s Brigades and Hamilton’s Portuguese Division to the village of Albuera, which Wellington had selected as the most propitious point of defence. Cole’s 4th Division was charged with dismantling the siege material. At midnight two of his brigades marched south. They were the Fusilier Brigade of the 7th and 23rd, now under the command of Lt Col Sir William Meyers and Brigadier-General Harvey’s Portuguese Brigade. They arrived at Albuera at 8 am.

The battle did not develop as Beresford had anticipated. On 16th May, Soult made a feint at his centre, but sent the bulk of his massive force around Beresford’s right flank. There, three Spanish DivisIons held two French Corps for more than an hour, while the 2nd Division under General

William Stewart deployed to support them. This impetuous general attacked the left of the French column from the line of march. The initial success turned rapidly to disaster. The weather had been threatening and a thunderstorm broke. At the same time the Polish cavalry attacked the brigade’s unguarded flank. In something like 5 minutes the brigade virtually ceased to exist as a fighting force. The one exception was the 31st, which was still coming up and had time to form square and resist the cavalry.

The second brigade under General Hoghton moved up behind the Spanish. ‘In fact, early in the morning, hearing of the enemy’s advance, General Hoghton, had in a hurry, turned out in a green frock coat. Whilst on horseback, in front of his brigade, his servant rode up with his red uniform and without, dismounting a change was immediately made. This public display of the national colour, and British coolness, took place under fire of French artillery.’ (Peninsular Sketches, by Actors on the Scene)

The brigade stood with arms ordered as the Spanish withdrew through them before moving forward and opening fire on the French. These were the first shots of one of the bloodiest musket duels in history. General Hoghton was severely wounded and his horse killed at about 1 o’clock. He tried to mount another horse but fell and was carried to the rear where he died two hours later.

Wellington is reported to have commented on the death of this popular and able officer:

"I understand that it was impossible for anybody to behave better than he did ... he actually fell waving his hat and cheering his brigade on to the charge."

Meanwhile Meyer’s brigade with two battalions of the 7th and a battalion of the 23rd delivered the final counter attack.

The casualties on both sides were appalling. Two thirds of Hoghton’s brigade had been killed or wounded. At the end of the action it was led off the field by the senior officer still standing – a captain.

Both General Stewart and Marshal Beresford wrote to the governor of Elvas, the Portuguese fortress some 30 miles away which was the base of the operations, requesting that General Hoghton be buried in the fort. The governor agreed, but as Hoghton was a Protestant, he could not be buried in the Catholic cemetery and so a bastion, high on the walls, below the castle was made available. There he lies to this day in a place that soon became known as ‘The English Cemetery’.

There were many letters praising Daniel and his courage, including one from Wellington to Lord Wellesley. In the House of Commons, following reports of the campaign, the Chancellor of the Exchequer moved an address to the Prince Regent, and Parliament voted that a monument should be erected, at public expense, to the memory of one who fell so gloriously in the Battle of Albuera. The monument by Chantry can be seen in the north transept of St Paul’s Cathedral, high up on the wall.

He was awarded, posthumously, the Army Gold Medal, engraved on the reverse ‘ALBUHERA’, now in the City of Lancaster museum.

It is comforting to record that Hoghton Tower is still in the possession of the de Hoghton family and that Daniel’s memory is kept alive there.