The Sieges of Badajoz

Badajoz has been much fought over through the centuries.  One calculation is that it has been besieged 42 times. Four of these occurred during the Peninsular War. Once by the French and three times by the British. The last siege was in 1936 during the Civil War, just within living memory.

Any siege is terrible for the civilian inhabitants. The besiegers may aim at the walls and the defenders' emplacements but many rounds end up destroying houses.  After a time food inevitably runs short since contact with the outside world is cut off.  When the second British siege was lifted the garrison had only one day’s rations left and was already planning to break through the blockade as the only way of surviving.

The fate of the inhabitants was even worse when the attacking troops were forced to take a fortress by storm. The tradition of centuries was that if a fortress would not yield,  the defenders could expect no mercy if the assault was successful and the town was given up to sack. On 23rd May 1801, when the Spanish besieged Campo Maior, their commander Manuel Godoy the so called Prince of Peace and a native of Badajoz, sent the governor a written demand to capitulate “sob pena de assalto,de saque à vila, e dos seus moradôres sejam postos a espada, sem excéção de sexo nem de idade” (or face an assault, the sack of the town and the inhabitants put to the sword, with no exception for sex or age). 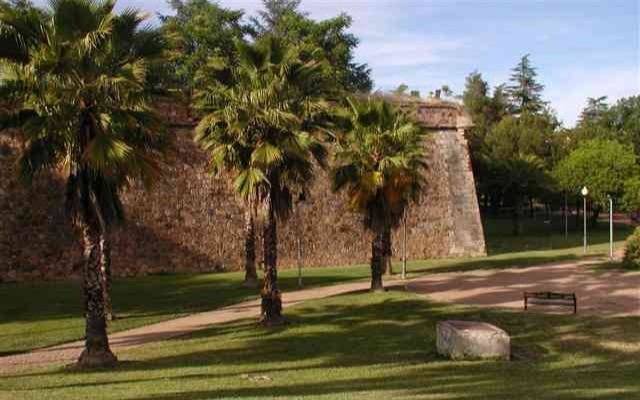 The infantry hated sieges.  Weeks were spent digging the trenches known as parallels to enable the guns to be brought close enough to bring the walls down.  This was done in all weathers and under the constant bombardment from the defenders.  The actual assault was viewed with some relief and there was never any shortage of volunteers for the ‘Forlorn Hope´, the small group that lead the main attack.  If the commander survived he was assured of promotion.  If the men survived, they would be the first at the shops, the wine cellars and the women.

In 1936, the days following the capture of the city by Col Yaguë and the Spanish Foreign Legion were terrible again for the citizens.  Men were stopped and their shirts torn off.  A bruised shoulder showed they had been firing a rifle and they were shot on the spot.  Those who fled to Portugal were sent back and confined in the bull ring, where they were shot in batches.

Until very recently, a short walk from the Cathedral brought the visitor to a dilapidated wall.  The words “Plaza de Toros” were just legible over the ancient double doorway. The bullring was never used again and a new one was built outside the city walls.  After thirty years without use, the old bullring was torn down and in its place a modern auditorium and congress palace was built, inaugurated in 2006. The sculpture of a rose is reminiscent of those who died there in August 1936, when the horrors of April 1812 were repeated.

It is therefore small wonder that the people of Badajoz are pacifists.

Basic Rules for a Siege

The citadel is surrounded with sufficient force to ensure the siege cannot be interrupted.

Trenches are dug from outside the range of the defenders guns, more or less parallel to the defences, in a zig-zag until close enough for the attacking guns to be brought to bear on the area to be breached.

The guns aim to bring down enough of the wall to make a ramp for the assaulting troops to gain entry.

When the breaches are judged to be feasible, the defenders are given the opportunity to surrender with full military honours.

If the attackers are forced to go through the horrors of an assault, the defenders can expect no quarter and the inhabitants can expect a period of loot and pillage.

The First Siege of Badajoz

The Second Siege of Badajoz

Great significance was attached to possession of the border fortresses that  protected the principal routes to and from Portugal and Spain:  Almeida (Portuguese) and Ciudad Rodrigo (Spanish) in the north, and Elvas (Portuguese) and Badajoz (Spanish) in the south.  The distances between them precluded any one commander from overseeing simultaneous operations in person. In the spring of 1811 following the retreat of Marshal Masséna’s French army from Portugal and the Allied (Anglo-Portuguese) forces invested Almeida, Wellington was in personal command of the northern sphere of operations.  The French attempt to relieve the beleaguered garrison was halted by Wellington’s victory at Fuentes de Oñoro (3-5 May), which turned back the immediate French threat in that region.

To the south, the Allies laid siege to Badajoz.  Although the general direction of the campaign was decided by Wellington, William Carr Beresford, Marshal of the Portuguese Army, was in operational command.  A natural son of the 1st Marquis of Waterford, he had served in the British Army from 1785 and was installed as Commander of the Portuguese army on 9 March 1809, at the beginning of a process of reorganisation (including discipline and the introduction of British methods) that transformed the Portuguese forces.  Much of the credit for the Portuguese becoming so vital and valuable a part of Wellington’s army was due to Beresford’s administrative talents. His qualities were acknowledged by Wellington when asked who might be his preferred successor.  He described Beresford as ‘the ablest man I have yet seen with the army … if it was a question of handling troops, some of you fellows might do as well, nay, better than he; but what we want now is some one to feed our troops, and I know no one fitter for the purpose than Beresford.’ He was not an inspired field commander and somewhat unfairly criticised by the Peninsular War historian, William Napier, for the carnage of Albuera.

Through the eyes of the Commander in Chief, Viscount Wellington