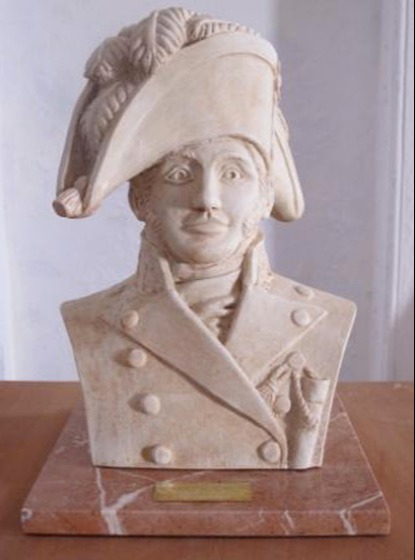 The Friends of the British Cemetery was honoured following a Regimental Parade at the Badajoz barracks.

General Fernando Gutiérrez praised the Regiment "Castilla 16" for its observance of traditions and added that others who honoured tradition were the English, specifically the Friends of the British Cemetery in Elvas.

Aware of the Peninsular War Museum project, planned for the corridor of the Chapel, General Gutiérrez then presented Celia Denney with a bust of General Menacho, Military Governor of Badajoz, who was killed defending the city on 4th March 1811.

The plinth bears a plaque engraved:

When Soult began his investment of Badajoz on 27 January 1811, his army was too small to surround Badajoz. General Mendizabal’s Spanish Army of Extremadura arrived with about 15,000 troops, 3,000 of which reinforced the fortress, while the remainder occupied the heights of San Cristóbal. Soult defeated Mendizabal’s army, however, at the Battle of Gebora on 19 February 1811.

The garrison of Badajoz, ably commanded by General Rafael Menacho, initially put up strong resistance and the French made little progress against the powerful fortress. On 3 March, however, General Menacho was killed on the ramparts by a chance shot and command of the garrison fell to Brigadier José Imaz.

The Spanish defence slackened and the walls were finally breached on 10 March. Soult was anxious to press the siege after he learned that Masséna’s army, plagued by sickness, starvation and a harsh Portuguese winter, had retreated from Portugal.

Concerned that the British would now be free to send a contingent to relieve Badajoz, Soult sent a deputation into the town to demand the garrison's surrender. Imaz capitulated and the French took possession of the fortress on 11 March.