The Worcestershire and Sherwood Foresters

The 29th Regiment of Foot, now the Worcestershire and Sherwood Foresters, was commanded by Lieutenant Colonel Daniel White at the Battle of Albuera on 16 May 1811. It formed part of Major General Houghton’s Brigade.

Lt. Col. White died in Elvas on 8th June 1811 of wounds received in that battle.  His stone was installed in the British  Cemetery in 2003 upon the discovery of his obituary in the Gentleman’s Magazine. 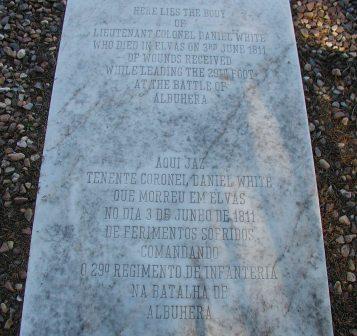 The Worcestershire Regiment dates back to 1694 when Colonel Thomas Farrington, an officer of the Coldstream Guards raised a new regiment in London. It was then the custom for Regiments to be named after their Colonels and this new regiment was named Farrington’s Regiment of Foot. This method of naming regiments led to confusion, as regiments were re-named with each Colonel and it was possible for more than one regiment to have the same name. 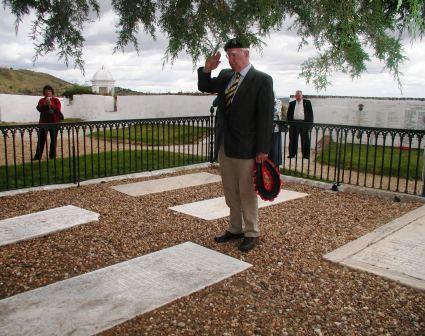 The regimental website records: Lord Wellington paid a high compliment to the 29th Regiment. It had suffered great loss at the battle of Talavera and Lord Wellington, in a letter to Lord Castlereagh, 12th September 1809, says:

I wish very much that some measures could be adopted to get some recruits for the 29th Regiment. It is the best regiment in this army, and has an admirable internal system and excellent non-commissioned officers.

The history of The Sherwood Foresters goes back to 1741 when England was at war with France and the new regiment was raised by Colonel Houghton. In 1751 numerical titles were introduced and the regiment became the 45th. The 45th Regiment served for twenty years in Canada and was awarded the first of the battle honours that adorn the Colours.

After fighting in the American War of Independence, the 45th returned home to Nottingham. The citizens of Nottingham requested that the regiment should be called "The Nottinghamshire Regiment" and the King agreed.

From 1808-1814, the 45th Regiment served in the Peninsular War and won thirteen battle honours. The nickname "The Old Stubborns" was bestowed on the regiment for its bravery at the Battle of Talavera. Wellington, describing the battle in his official report said: "Upon this occasion the steadiness and discipline of the 45th Regiment were conspicuous".

In the Battle of Buçaco, the 45th Regiment distinguished itself leading the attack on a dense column of French troops. “I can assure you I never witnessed a more gallant charge", wrote Wellington in his report.

At the Third Siege of Badajoz, in 1812, the 45th were the first to enter the castle and Lt McPherson tore down the tricolour flying over Badajoz Castle. For want of a flag, he ran his own scarlet jacket up the flag pole.  Since then April 6th has been celebrated every year as the Regimental Day and a scarlet jacket is run up the flagpole at Nottingham Castle.

The 45th became part of Picton’s 3rd Division and was recognised as one of the best of Wellington's veteran units.

The Worcestershire and Sherwood Foresters Regiment is now part of the 2nd Battalion of the Mercian Regiment.