Lieutenant Colonel Sir William Myers commanded the British Fusilier Brigade at the Battle of Albuera on 16 May 1811. The brigade was composed of two battalions of the 7th Foot (Royal Fusiliers) and one battalion of the 23rd Foot (Royal Welch Fusiliers).

The day was mine yet they did not know and would not run.
Soult wrote to Napoleon

William James Myers, born on 27 November 27 1783, was the son of Lieutenant-General Sir William Myers, Bt. who died in 1803 while in command of the British Forces in the West Indies.

Sir William Myers was mortally wounded by a musket-ball while on horseback at the head of the Fusilier Brigade and died of his wounds at Valverde on 17 May 1811. An eyewitness account of the Royal Fusiliers at the Battle of Albuera 1811 and of the death of Colonel Sir W. Myers, by Sergeant Cooper, who took part in the charge. This account is taken from the regimental record of the Royal Fusiliers, held at their museum in the Tower of London. 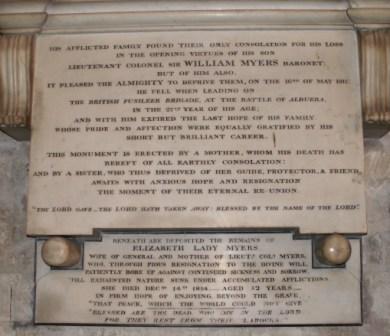 The day was apparently lost, for large masses of the enemy had gained the higher part of the battlefield and were compactly ranged in three heavy columns, with numerous cavalry and artillery, ready to roll up our whole line. The aspect of that hill covered in troops was no jest, as we had no reserves to bring up.

At this crisis, the words “Fall in Fusiliers,” aroused us, and we formed line.  Having arrived at the foot of the hill, we began to climb its slope with panting breath, while the roll and thunder of furious battle increased.  Under this tremendous fire of the enemy our thin line staggers; men are knocked about like skittles, but not a backward step is taken. Here our colonel and all the field officers of the brigade fell, killed or wounded, but no confusion ensued.

The orders were “Close up! Close in! Fire away! Forward!” We are close to the enemy’s column; they break and rush down the other side of the hill in mob-like confusion.  As the brigade commenced its march, Sir W. Myers’ horse was shot from under him, and he advanced on foot until another charger was brought, which he had scarcely mounted when the fatal shot struck him, passing from under the  hip upward in an oblique direction through the intestines.”

In a letter written from Elvas, on May 20th 1811, the Duke of Wellington expressed his grief over the British losses to Lady Myers:

"Madam, I cannot allow the dispatches which I am now sending to England to go away without writing a few lines to condole with your ladyship upon the severe loss of which they convey the intelligence. Although the wife and mother of a soldier must be in some degree prepared to receive intelligence of this description, it cannot be expected that you should not be severely afflicted by the loss you have sustained; and I do not address your ladyship with the hope that anything I can write will have the immediate effect of alleviating your sorrow. It must however be some consolation to you to know that your son fell in an action in which, if possible, the British troops surpassed all their former deeds, and at the head of the Fusilier Brigade, to which a great part of the final success of the day was to be attributed.

As an officer he has been highly distinguished, and if Providence had prolonged his life he promised to become one of the brightest ornaments to his profession, and to increase the military reputation of his family, and to be an honour to his country.  I could not deny myself the melancholy satisfaction of communicating to you my sense of your late son’s merits, in hope that at some future period the occasion and mode of his death, as well as this evidence of my favourable opinion of him, under whose command he had served for some time, may alleviate your affliction”

I have the honour to be, Madam, Your Ladyship’s most obedient, humble servant .

Lady Myers erected the Albuera Memorial in St. Mary's Church, Cheltenham, in memory of her son.

A memorial  in St. Paul’s Cathedral, London, bears the inscription:  “Erected at the public expense to the memory of Lieutenant-Colonel SIR WILLIAM MYERS, Bart., who gloriously fell in the battle of Albuera, May 16th, 1811, aged 27 years.” 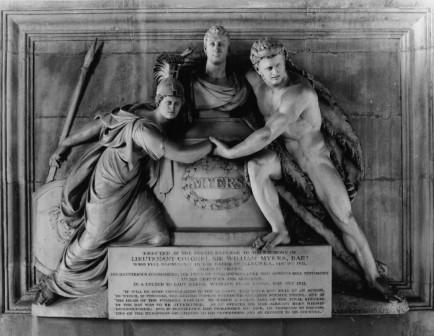 Fusilier was originally the name of a soldier armed with a light flintlock musket called a fusil. The word was first used around  1680 and has later developed into a regimental designation. The general adoption of the flintlock musket and the suppression of the pike in the armies of Europe put an end to the original special duties of fusiliers and they were subsequently employed in light infantry work.

Attached to the various types of fusilier headdress, including the modern beret, is the hackle. This is a short cut feather plume, the colour or colours of which vary according to the regiment. White was worn by both the Royal Fusiliers and the Royal Welch Fusiliers.