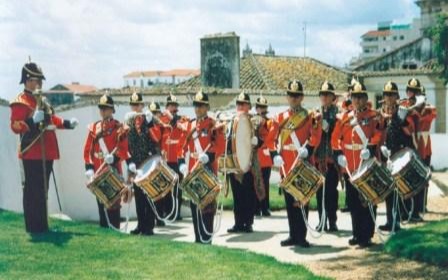 In the Spring of 1811, Wellington sent Marshal Beresford to relieve Badajoz from the French, at the head of an Allied army over 30,000 strong,  of which only 10,000 were British soldiers. However, before he could take effective action, Beresford learned that Marshal Soult and 23,000 Frenchmen were coming up behind him along the road from Seville. He took up a position astride this road on a long ridge overlooking the village of La Albuera [Albuhera].

A Spanish Division was on the right and the British 2nd Division - which included the 3rd [Buffs], 2nd/31st [East Surrey] and the 57th [Middlesex] - was in the centre, a Portuguese Division on the left and a German Brigade forward, down in the village. The British 4th Division was in reserve.

Soult attacked at first light on 16 May with a feint against the Germans in the village while his main thrust against the Spaniards had the object of rolling up Beresford’s force from the right. The Buffs, sent down to help the Germans, were recalled almost at once and attacked the French columns but in a sudden hailstorm, French Hussars and Polish Lancers charged from their right rear and cut them to pieces. Only 84 men survived unwounded out of 728. The Regimental Colour was captured but was later recovered and returned by the Royal Fusiliers. The bloodstained King’s Colour was later found inside the tunic of Lieutenant Latham who was apparently dead.

Though surrounded by Hussars who wounded him repeatedly, he had torn the Colour from its pike and concealed it. He survived, fearfully mutilated, and his deed is revered in the Regiment to this day.

The East Surreys formed square and stood firm while the Spanish formation on their left broke. In his dispatch, Wellington wrote: “After the rest of his brigade was swept off by cavalry this little battalion alone held its ground against all the massed French columns.” The Middlesex, in the centre of the centre brigade, withstood bombardment by grapeshot and the attacks of French columns for four hours. Their Commanding Officer Colonel Inglis, shot through the lung, lay in front of his bullet-torn Colours exhorting his men: “Die hard, 57th, die hard!” thus giving them the nickname of “The Diehards.”

The situation on the ridge appeared to be desperate. Beresford ordered a retreat but the 26-year-old Henry Hardinge of the Middlesex, attached to the Portuguese - later a Commander-in-Chief - persuaded General Sir Lowry Cole to disobey orders and counter-attack with his reserve 4th Division, thus deciding the battle. The survivors of the East Surrey and Middlesex took part in the final bayonet charge that broke the French.

This great victory, achieved purely by esprit de corps - no British regiment would leave the field while any other remained upon it - courage and skill at arms, is celebrated annually within the Regiment on 16 May with the ‘Diehard Ceremony: and the drinking of the toast “To the Immortal Memory.” 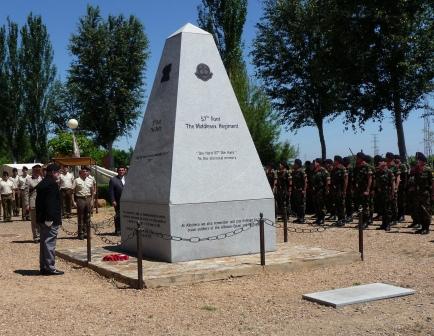